RPM has created front A-arms for the Electric version of the Traxxas Rustler and Stampede. Traxxas has recently introduced newer, more powerful versions of the Electric Rustler & Electric Stampede, combined with emerging technologies in both battery and motor power, it was time for RPM to help strengthen these venerable yet awesome vehicle platforms.

RPM front A-arms for the Traxxas Rustler and Traxxas Stampede are built to withstand some of the toughest abuse. Incredibly, RPM was able to shave some unwanted weight as well. RPM Front A-arms are nearly 25% lighter than stock versions of the same A-arms yet the RPM versions are backed with our world-renowned breakage warranty. Additionally, weâ€™ve increased clearance areas in the outer portion of the A-arms to allow more droop travel when used in conjunction with RPM oversized bearing carriers (RPM #80372 & #80382).

RPM front A-arms for the Electric versions of the Traxxas Rustler and Stampede are sold in pairs and are available in either black or blue. These A-arms are molded with what is fast becoming an RPM trademark design of angled leading and trailing edges to reduce frontal edge mass and improve the a-armâ€™s ability to ride up and over tall obstacles instead of slamming into them. RPM A-arms are extremely rigid for superior ride and stability over the roughest tracks and terrain.

Discuss the new RPM A-Arms for the Traxxas Rustler and Traxxas Stampede in our General Electric Talk forum.

FacebookTwitterPinterest The new Villain from Traxxas is the next generation of this best-selling, 7.2-volt, deep-V off-shore racer. The Villain is powered by the all-new XL-10 Marine water-cooled electronic speed control. It features 3 drive profiles, reverse, one-button setup, and thermal shutdown protection. It’s housed along with the other electronics in a sealed radio box for…

FacebookTwitterPinterest The new Traxxas T-Maxx 2.5R and 3.3 – use Revo style axles which are much larger in diameter than older version axles and create interference issues on our current A-arms for the T-Maxx 2.5 (#80071 – #80078). RPM’s newest A-arms for these trucks compensate for the larger axle diameters with axle clearance zones built…

FacebookTwitterPinterest XRAY presents the all-new 808E – the electric powered version of the successful XRAY nitro XB808. The XRAY 808E has been designed for professional racers andfeatures ultra-high performance parts, finest quality materials, unmatched precision in manufacturing, and backed up with legendary XRAY support and service. The 808E is a professional race car delivered in… 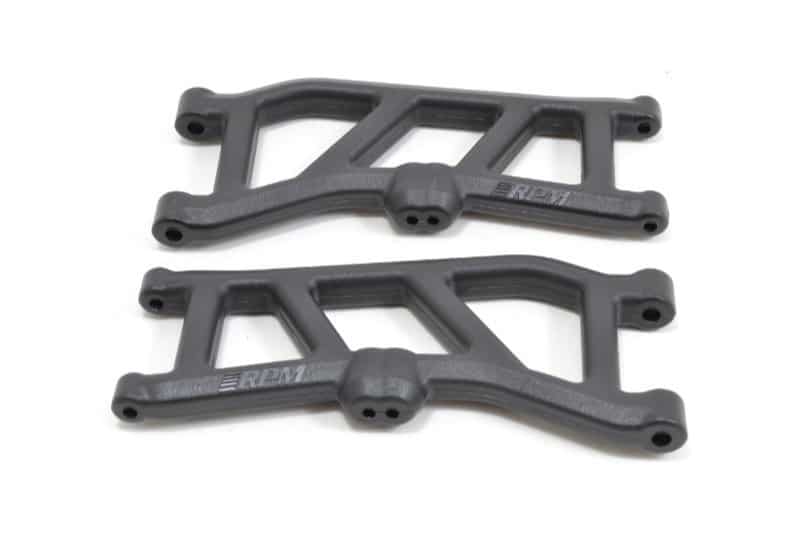 FacebookTwitterPinterestAttention to all the ARRMA 4s Kraton and Outcast owners, RPM has just released FRONT & REAR A-Arms for you! The new RPM Arrma 4s A-Arms are designed to not only increase strength and durability but also improves on the stock Arrma 4s A-Arms by removing the slop found in the stock arms. As well…